For Scholarship/Bursary, please email:
studentsupport@crescendo.edu.my
[Note: For students coming from household income of less than RM4,000 per month.]

There are plenty of things to do and places to go in Johor. Sprawled with an abundant mix of breath-taking nature parks, and an extensive array of adventure filled, high profile entertainment squares. Johor Bahru promises visitors a mesmerizing experience that will sweep them off their feet. These are just some of them 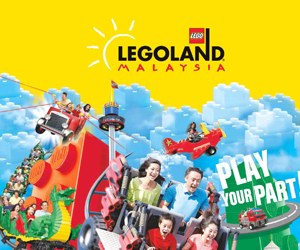 LEGOLAND Malaysia Resort brings together a LEGOLAND Park, Water Park and Hotel in one LEGO® themed location. It is a family holiday destination with more than 70 hands-on rides, slides, shows and attractions. Almost everything is hands-on, so you can push, pedal and program, or steer, squirt and splash, your way through a truly interactive experience – and of course there’s building too.

LEGOLAND Malaysia has seven themed areas of attractions for all ages such as The Beginning, LEGO® Technic, LEGO Kingdoms, Imagination, LEGO City, Land of Adventure and MINILAND. It’s an inspirational land where the children are the heroes. From LEGO experiment centres to rollercoasters, the park is a day-long voyage of discovery for all the family.

The centre piece is MINILAND, where Asian landmarks have been recreated using more than 30 million LEGO bricks. It’s an interactive world on a scale of 1:20, where people, trains and aeroplanes come to life at the touch of a button. 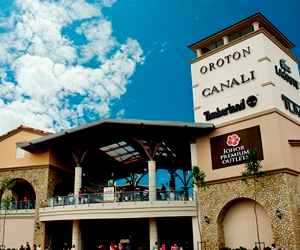 Johor Premium Outlets is a collection of 120 designer and name brand outlet stores featuring saving of 25% to 65% every day. The center is held by "Genting Simon Sdn Bhd" (GSSB), a wholly owned subsidiary of Simon Genting Ltd ("SGL"). SGL in turn is a 50:50 joint venture between Azzon Ltd ("Azzon"), which is a wholly owned subsidiary of Genting Plantations Bhd, and Premium Outlets®, the outlet division of Simon Property Group. Johor Premium Outlets®, located at the intersection of the North-South Expressway and the Second Link Expressway, officially opened on December 11, 2011. The center is highly accessible to all traffic going to and from Johor and Singapore. It is about an hour drive from the City of Singapore, about 3 hours from Kuala Lumpur and only a short distance from Senai International Airport. Johor Premium Outlets® is targeting a wide range of shoppers including area residents as well as international visitors from South East Asia. It will also serve as a hub between Resorts World Genting, which is about 3.5 hours drive and Resorts World Sentosa in Singapore, which is about an hour's drive from Johor Premium Outlets. 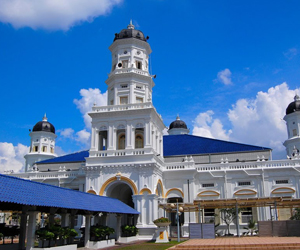 Tuan Haji Mohamed Arif bin Punak was the architect of the mosque. He intentionally based much of its appearance on colonialEnglish Victorian architecture as noted by the minarets that take the form of British 19th century clocktowers. The architecture of the mosque additionally includes some Moorish architecture elements, along with some minor Malay influence. Tuan Haji Mohamed Arif bin Punak was supervised by the Johor government engineer Dato' Yahya bin Awalluddin who communicated the Anglophile sentiments of Sultan Ibrahim ibni Sultan Abu Bakar who was the Sultan of Johor at that time. This Anglophile influence can further be seen in the British architectural influences not only on the Sultan Abu Bakar State Mosque but also in several others government and palace buildings in Johor constructed during the same period.

The mosque sits on top of a prominent hill, overlooking the Straits of Johor. The mosque is named for Sultan Abu Bakar, the father of Sultan Ibrahim who ordered its construction. Address: Johor Bahru, Johor, Malaysia, +607-223 4935 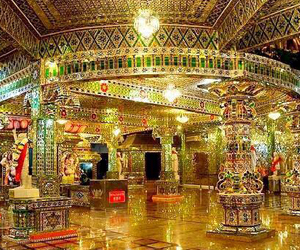 The Arulmigu Sri Rajakaliamman Glass Temple is a major Hindu temple as well as one of the oldest temples in Tebrau,Johor Bahru, Malaysia. It is also one of the state's tourist attraction. The temple was listed in the Malaysian Book of Records as the first and only glass temple in the nation on May 12, 2010. The temple, one of Johor Bahru’s oldest Hindu temples, is situated next to the railway tracks between Jalan Tun Abdul Razak and Jalan Mohd Taib (or close to the Tebrau Highway). It started in 1922 as a simple shelter on land presented by the Sultan of Johor.

In 1991, Sri Sinnathamby Sivasamy, current temple chairman and chief priest, also known as Guru Bhagawan Sittar inherited the administration of the temple from his father. He is the inspiration and driving force behind the temple. The Guru made a commitment to rebuild the temple upon inheriting it from the humble hut it once was. In spite of difficulties and challenges, the temple was rebuilt and officially reopened in 1996.

The Guru had the inspiration to rebuild the temple in glass during one of his trips to Bangkok. He was in a tuk-tuk (auto-rickshaw) in Bangkok when he saw a light shining like a diamond, some 2 km away. The driver told him that it was a wat (temple). When he went there, he found that it was the glass artwork at the temple entrance that had caught his eyes.

He was amazed that a small glass artwork could capture his attention from a vast distance. This inspired him to use this technique in the Arulmigu Sri Rajakaliamman Temple. He believed a temple fully embellished with impressive glass artwork will attract local devotees and visitors from the world over.

Transformation of the temple with glass fittings started in 2008 and was completed in October 2009. Since then, it has become one of the state's major tourist attractions. 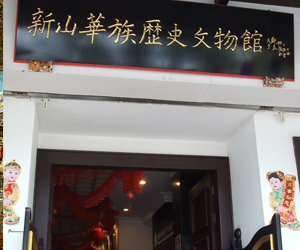 The museum building is a 4 storey shop lot among a row of shop houses along Jalan Ibrahim, JB. The well-renovated 4 storey building adopts the state-of-the-art modern technology for its effort in saving energy bills, using sensors to turn on and off the lightings at every floor. The first, second and 3rd floor showcase the history of Chinese immigrants into Malaya in the 1800s and 1900s, the founding of the triads, clans and eventually associations of the ethnic Chinese area groups, (Hokkien, TeoChew, Cantonese, Hainanese, and Hakka). Records of the well-known Chinese Clan heads, and their beneficial, philanthropic deeds (Like building the Foon Yew Chinese schools, temples and clan houses etc.) were documented well to brief visitors of the tough founding years. The museum also displays photos of the then livelihood when early Chinese immigrants by the ship loads arrived at the peninsula to find jobs waiting for them in tin mines, rubber plantations, and other agricultural fields ( cash crops like pepper and gambir), as well as other minor industries. As years went by, some of them and their descendants became big time traders and large land owners, and eventual tycoons.

The top floor of the 4 storey museum devotes its exhibiting space totally for the chronicle of Dr Sun Yat Sen, (1866-1925) the father of republican China. This great man of modern China was known to have visited Johor Baru during his many travels overseas to appeal for support and funds to overthrow the despicable, rotting Empire of Qing Dynasty and its draconian Manchu ruler. Admission fee is RM3. 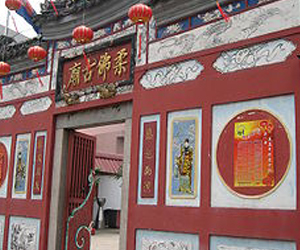 Johor Bahru Old Chinese Temple known as Old Temple by the locals, is a Chinese temple located in Johor Bahru, Malaysia. Located at downtown Johor Bahru of Jalan Trus, the temple is flanked by modern skyscrapers. This temple is one of the oldest structures in Johor Bahru. The temple is a place of worship and a symbol of unity among Five Chinese Dialect Groups which are "Teochew", "Hoklo (Hokkien)", "Cantonese", "Hakka" and "Hainan". The temple was built during the 19th Century by then Head of Ngee Heng Company led by Tan Hiok Nee and various Chinese community leaders.

Although there are no actual records regarding the completion of the temple, the plaque and the century-old bronze bell located in the temple shows that the temple is around 130 years old.

In 1995 / 1996, it underwent a major renovation at a cost of MYR1.5 million. Much of its cultural aura was preserved, and important relics such as the century-old bronze bell, joss stick pot and wooden tablet remain.

In 2007, a Documentary Series called My Roots featured the temple in the episode "Grand March with the Deities". They are open only on Thursdays from 730am to 530pm. 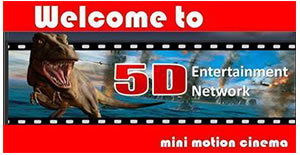 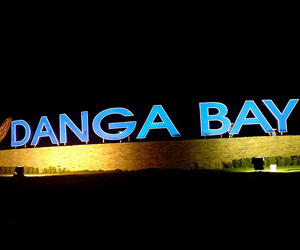 Danga Bay or Teluk Danga is the largest recreational park in the city of Johor Bahru, Johor, Malaysia. It is located near Istana Bukit Serene, about 7 km from Johor Bahru's city center. Events are held there.

The site is accessible via a network of main roads, International Airports, cargo hubs and seaports. Large projects have been earmarked for this area, including a new financial and commercial hub, hotels, exhibition and convention centre, marina and upmarket residential properties. Nestled in the south-central part of Iskandar Malaysia, Danga Bay is Johor Bahru’s first and largest mixed residential-commercial development. It stretches along a 25km scenic waterfront facing the Straits of Johor and covers and area of approximately 450-acre (1.8 km2). 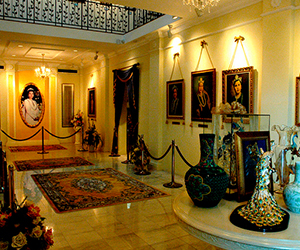 Established in 1910, this art gallery remains near the top of every visitor's "must-see" list. Even if you cannot differentiate a Picasso from a Monet, you can easily trace the developments of Johor through the exhibits and art pieces. The venue not only represents local artists but deals in discovered and historical items as well. In fact, with the many displays of traditional clothing, weapons, currency, manuscripts, fine works of art, beautiful calligraphy scrolls and ceramics, you will probably think this is a museum instead. Admission is free. 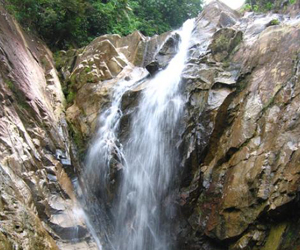 Gunung Pulai is a 654 meter high hill near the city of Johor Bahru. Although "Gunung" means "mountain or Mt." in Malay, it is technically not high enough to be regarded as a mountain. It might be regarded as a mountain because it is the only major high point in an otherwise flat region; however, here I will call it a hill. But what makes this place special is because it still contains substantial primary rainforest cover since it is a water catchment area for nearby Johor Bahru and Singapore, and it also has a spectacular waterfall, although it is under serious threats as well – which I will get to in a moment.

Most people have absolutely no idea that at least part of the forest that clothes Gunung Pulai is one of the most magnificent unlogged dipterocarp rainforest anywhere in Peninsular Malaysia. There is a very high proportion of large timber trees in this essentially untouched rainforest, most of them a meter or more in diameter for bole/trunk size, and almost all of them have very well formed, and dense crowns. A majestic sight to behold today, since these forests are all but gone.

Gunung Pulai is easily reached by the North South Highway, and turning into the Kulai exit, after which you would need to detour underneath the highway by following a signboard to your right just after exiting the toll plaza. Follow along the road, passing oil palm estates and a quarry that are both eating away at the hill for about 5 or 6 km, until you reach a village called Kampung Sri Gunung Pulai. The road that runs through this village leads all the way to the entrance of a recreational forest that has long since closed down after a fatal landslide occurred there some 10 years ago and took some lives. You will need to park your car at the start of this 5 km road that leads all the way to the summit (on which sits some telecommunication towers), and proceed on foot. A few hundred meters in, the road splits into two, one going up to the peak, and one going down to the picnic/waterfall area, and you will see the archway to the now defunct recreational forest.